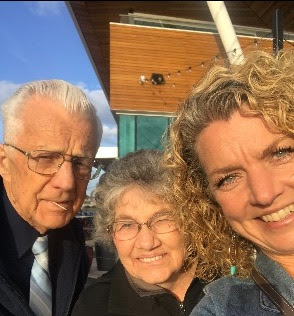 be gone or not. The trip was planned for months, but my dad had been in and out of the hospital. It seemed a normally obvious choice to stay home near him. “There’s no reason you should hold your life back just because mine’s slowing down,” Dad said.

The morning before I was to leave, I thought I would be sending a message to the Captain that I wouldn’t be able to go. He knew I was deciding. Instead, I felt a “hell yes” inside. I would be in cell range this time, my reasoning mind thought it would contribute, and back Tuesday. My reasoning was blown when well on the way to the boat I learned we wouldn’t be back until Wednesday. I was in now and committed. I trusted it to work out.

I felt time was of the essence this year and made it my goal to take dad sailing after I earned my certifications over the summer. It was my anniversary gift to both him and mom. We’d planned October, but we were questioning now if he’d have the strength to get on a boat. I was yet discover another dimension of time’s collaboration with me.

Three days into the trip, I called dad from the boat as I was doing every day. He was back in the hospital. I moved to the bow for privacy as we sailed in the sunset toward Gig Harbor, our dock for the night.

Dad could hear the water in the background, as he’d heard for 45 years of being a tugboat captain. I was traveling waters he had traveled, as I did on the Columbia River and the Inside Passage, and now the Puget Sound. We talked tacks and wind, tugboats and sailboats. He asked me a lot of questions, that I could now answer from my experience, of where tugboats and sailboats differed and were similar. He knew the questions to ask and he understood it all. I felt deeply connected. I could hear the excitement in his voice. I could feel the twinkle in his eye.

I could also hear in his voice that something had changed. I rented a car the next morning to get off the boat and to the hospital. Somewhere in the course of events the next few days and the chaos of the hospital, it occurred to me that my dream was fulfilled. Dad and I sailed together on the bow of that boat, The Puelche (Chilean for an offshore wind). We now shared this common interest and had the conversation that would last me a lifetime.

The urge to go sailing at a time when his time here was uncertain was as much his spirit as my own urging us to have this experience together. Silently, he looked forward to it as much as I did. Subtly, he let me know that he liked the idea of another captain Hawkins. All thoughts that hadn’t occurred to me when I started sailing. They were bonuses as the dream progressed through time.

Hand in hand in a conversation 2 weeks earlier he told me “the end is near.” My tears flowed even as I knew, and told him, he would be with me always. There wasn’t anything really left unsaid that couldn’t be continued with him from the other side. And that is what I feel now. Dad passed Sunday morning, October 6, 2019.

I feel my relationship with Dad in all the dimensions of time. The memories, the present, and knowing he is with me always — on the water and off. When he crossed with mom and family by his side, I felt my heart lighten. He was free…and present…unbound by time.

Everyday you influence something. Time is a stop we make along the way. Enjoy it. Your inspiration, passion, perspectives, values, choices, and time are ephemeral and powerful resources that multiply with your investments. Dad’s time here seems simultaneously limited and eternal. It’s a whisp of time and it’s all time. While he was here he lived his legacy, his philanthropy, and as we all knew, had one speed regardless of this thing called time. And it continues. I had time with him and then it was time for this form of relationship to end and another to begin. Now his life lives in me. My dad, my teacher, my captain, my friend. Deeply. Profoundly. Humorously.… Beyond time.

Shelley Hawkins, MS, Intuitive Business Mentor, Best-Selling Author & Inspirational Speaker who believes that liberating the intrinsic genius (genius is becoming who you were all along) of the individual creates thriving, authentic companies, creative expressions, and relationships in the world. She is founder of The Self Connection™, and creator of Your Soul in Business™ Retreats. For over ten years, Shelley has provided expert guidance and energy alchemy in matters of liberation and creation, personal transformation, purpose, business, and vitality with food. Her clients are high creatives, possibility thinkers, leaders, visionaries, and edge-dwellers, including top real estate agents, healers, financial advisors, parents, attorneys, writers, yogis, coaches, contractors, entrepreneurs and doctors.